It is a fundamental law of nature, that whatever has a beginning, would have an end.

Therefore, it is important for both employees and employers to be aware of the various ways that employment relationship could end, so that they can put every necessary plans in place. 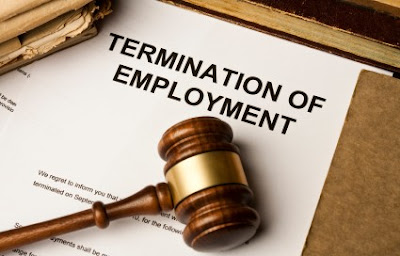 It is inevitable that employment termination will occur eventually, and it could either be voluntary, on the employees part OR involuntary, at the hands of the employer.

LETS EXPLORE BOTH A LITTLE FURTHER

INVOLUNTARY ( At the hands of the employer)

1) Layoff: When there is an economic downturn like we currently have in Nigeria, companies may be forced to layoff staff. This is because economic downturn usually causes a slowdown in business and organisations have to find a way to survive.

An example, is what is happening in the oil & gas sector. Because of the drastic fall in the price of oil and the fall in demand of Nigeria's crude oil by countries that used to purchase from Nigeria, it had a catastrophic impact on revenue, so oil companies had to start laying off staff. This is a situation that most employees would not have foreseen, and it had nothing to do with their performance, but rather it had to do with economic cycles.

2) Dismissal: Also referred to as firing. This happens  when the employer asks the employee to leave, generally for a reason which is the fault of the employee. It carries a stigma in many cultures, so employees hardly ever mention that they left a job because they were fired.

3) Voluntary Redundancy: Some companies resort to this as a means to reduce their workforce. Under such a plan, no employee is forced to leave their job.

Additionally, employees are given the option to resign in exchange for a fixed amount of money, frequently a few years of their salary.

E.g. A well established commercial bank in Nigeria recently offered voluntary redundancy to its workforce, and were flooded with people who took up the offer and collected the juicy sum offered.

VOLUNTARY TERMINATION (At the hands of the employee)

i. Resignation: an employee can resign from his or her job for a variety of reasons. There was a lady who got a great job, and announced that she planned to stay there for life, only for her to decide she wanted to start a business a few years later, hence  she handing in her resignation letter.
Some reasons why people resign:

New job, relocation, etc. e.g a lady approached us to help her find a job in Ibadan. She had a very good job in Lagos, but wanted to join her husband who works in Ibadan. Hence, it is of paramount importance for hiring managers and employers to enquire about family when interviewing.
ii. Returning to School: at some time in his career, an employee may choose to go back to school.

iii. Abandonment: Employees sometimes abandon their positions by simply not returning to their duties. This may be due to any or no of reasons. This can affect productivity greatly.

iv. Retirement: Employees retire when they reach a certain age. (E.g in academia its 70, non academia its usually 65, public service is 60 or 35 years of service). So it's usually stipulated by individual company or government policies.

There are times when a termination is agreed upon even before the employment starts.

Hiring managers should realize that, great employee will eventually have course to leave or that great job will end one day. What happens then?
Adaora AyoadeMD/CEO
EZ37 Solutions Ltd
... consistently adding value