As explained in our previous blog post, employment termination refers to ending the contractual working relationship between an employer and an employee.
In this write up I will be sharing a few cases experienced on the field. These are all cases of termination of employment, of employees that had what is referred to as a common law Contract of Employment. I hope readers will learn from these experiences. 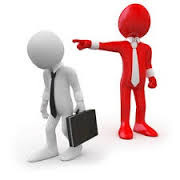 CASE 1:
The principal at a school, reported that a teacher, also employed at the same school, decided to leave her job, in the middle of the school term. The teacher handed in her resignation to the principal who attempted to reject it on the grounds that she cannot abandon the students in her care. She also did not adhere to the terms relating to payment in lieu of notice.

How should this be addressed?

It is actually within the spate of the law for her to resign, once she adheres to the terms of her contract. Whilst it would be seen as morally wrong that she would drop her responsibilities midway and leave, one doesn't know whether she was mis-managed by her supervisor, which she on her part could also view as morally wrong.

The only thing here that can be be done is that she makes the payment in lieu of notice, but she should realize that it could affect the chance of her getting a good reference.

CASE 2:
An Admin Manager was hired into a company. After several months of being with the company, he realized that the admin officer that had been working in his department, even before his joining, was someone he couldn't retain in the department if he was to achieve the departmental goals and objectives. The admin officer was grossly incompetent and unable to meet up to the expected performance standard, despite being coached, counseled, etc.

The manager was eventually left with no choice but to terminate the admin officer's employment. Hence, he invited him for a talk and advised him to resign so as not to affect his career growth. The employee submitted his resignation letter and left honourably.

CASE 3:
In another case, an employee working at a firm was given a letter terminating his employment with effect from the date the letter was received. He was told that according to his contract of employment, he would be paid one month salary in lieu of notice and would be paid immediately.

The employee felt so bad and decided to take the matter further, claiming that the employer had an ulterior motive and that no reason was given as to why he was being terminated.
QUESTION: Has the employer acted illegally?
ANSWER: No!
REASON: Because, under the common law contract of employment, the employer can terminate the contract without giving any reason at all.